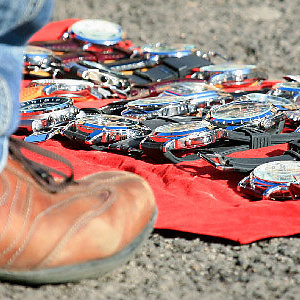 This news belongs to our archive.

From fake versions of the drugs Viagra and Xanax to phony designer watches and handbags, counterfeiting is rising fast and is increasingly becoming a booming underground economy. And while counterfeiters reap significant profits, millions of consumers are at risk from unsafe and ineffective products.

Who hasn’t been tempted to purchase a fake designer handbag or watch ? They are a fraction of the cost of authentic designer products, ranging from the hundreds to the ten-thousands depending on the designer, the style and the materials used. But there are many reasons not to buy knock-offs, first and foremost because fakes harm people and hurt the economy.

While counterfeiters continue to reap significant profits, millions of consumers are at risk from unsafe and ineffective products. Prof. Hyeonho Park, Director of the Institute of Crime Science at Yongin University, Republic of Korea, says that the health risks associated with counterfeiting are diverse.

One of the most harmful forms of counterfeit goods is fraudulent medicines. In recent years, there has been a marked increase in the manufacturing, trade and consumption of these products – often with harmful, and at times fatal, results.

The juicy business of fakes

The sheer size of the counterfeit industry is staggering. A report from the Organisation for Economic Cooperation and Development (OECD) put the value of counterfeit goods that crossed international borders at over USD 250 billion in 2007. That’s far larger than other scourges of the underworld economy, such as weapons smuggling and human trafficking. It even rivals the international trade in illegal drugs.

Brian Monks, Vice-President of Anti-Counterfeiting Operations at Underwriters Laboratories Inc., sees an even bigger problem : counterfeiting has become one of the major activities of organized crime.

“ Today we are experiencing global ’perfect storm conditions’ for the supply of, and demand for, counterfeited and pirated products. Intellectual property theft is a serious international crime that has reached epidemic proportions and continues to grow each successive year. ”

“ This criminal activity is as complex, sophisticated and hard to eradicate as illegal drug operations. Not only does product counterfeiting rob billions from the economy, but it also places the health and safety of the consumer at risk and funds organized crime. ” Most worryingly, US authorities have reported that the sale of counterfeit goods, including fake designer handbags, is a source of funding for terrorist groups throughout the world.

Crime of the century

Product counterfeiting has been appropriately described by many as the “ crime of the 21st century ”. Its growth has followed the overall growth of the global economy and outsourcing. For example, as production moves further away from companies that originally designed the product, there is more opportunity for corruption and fraud to find its way into the process. What’s more, the Internet has fuelled the industry’s reach and scope even further.

Where’s the harm, you might ask ? The truth of the matter is quite startling. Counterfeits create an underground trade that deprives governments of revenue for vital public services and imposes greater burdens on taxpayers.

Counterfeits cause financial turmoil for businesses.

Furthermore, counterfeiting can significantly reduce the profitability of legitimate businesses. Internationally, the trade in counterfeit products is estimated to cause economic loss to legitimate companies in the range of USD 500 to USD 700 billion annually.

By 2015, the International Chamber of Commerce (ICC) expects the value of counterfeit goods globally to exceed USD 1.7 trillion. That’s over 2 % of the world’s total current economic output.

Not only do counterfeits wreak havoc on the economy, they also cause other financial turmoil for businesses such as low turnover, stolen know-how, lost jobs, wrongful lawsuits caused by counterfeited products and price hikes following beefed up security systems used to counter organized criminal activities and investments in research and development.

The ICC puts the cost of lost tax revenue and additional welfare spending due to counterfeit goods up to USD 125 billion in developed countries alone. And 2.5 million jobs have been lost as a result of fake products.

Here’s the bottom line : counterfeiting costs big bucks. These costs can compromise the long-term survival of a business. It is therefore crucial to protect products and material goods, especially in turbulent economic times, when businesses must maximize their profitability.

What is being done globally to tackle the problem ? Mike O’Neil, Secretary of ISO/TC 247 on fraud countermeasures and controls, says that the combat against counterfeiting is done in four primary areas :

To effectively protect our intellectual property from this globalized, adaptive and increasingly industrialized enemy, says Brian Monks, we must focus our limited resources and efforts on the right actions taken at the right times in alignment with the right strategies.

Prof. Park agrees that the cost of combating counterfeiting is not negligible – and one of the reasons why ISO standards are so appealing. “ ISO International Standards, ” he says, “ can prevent or reduce any tangible or intangible loss and cost from fraudulent attacks in a cost-effective manner.”

By 2015, the value of counterfeit goods globally will exceed USD 1.7 trillion. That’s over 2 % of the world’s total current economic output.

Law enforcement will benefit not only from participating in the development of ISO standards, adds David Brown, but also in their daily use. “ Having common mitigation methods that span all industries helps law enforcement agents. This is made possible by reducing training overheads because a skill learned for one item can be used for many other items.”

Market surveillance may also be used to counter the proliferation of counterfeit goods, explains Graeme Drake, Principal and owner of international management consultancy GED Advisory, by ensuring that products placed on the market conform to the relevant technical regulations.

Market surveillance is a crucial policy tool that protects the health of consumers and the safety of workers by removing dangerous products from the market. It also levels the playing field for compliant businesses by taking action against fraudulent manufacturers.

There is no question about it that international cooperation is essential to fight counterfeiting and fraud. Law enforcement and legislation, for example, play key roles in bringing counterfeit criminals to justice. But they cannot do it alone. International Standards can also be a part of the solution.

Brian Monks captures it nicely : “ ISO can support international efforts to protect consumers around the world by continuing its work with anti-counterfeiting standards, especially with regard to product authentication solutions along the supply chain from the manufacturer to the end consumer. ISO standards can harmonize international efforts, spread best practice for product protection and increase consumer confidence. ”

And while standards may not solve the counterfeit debacle entirely, they can certainly curtail the financial loss and social consequences that result from fraud. Their use provides a cost-effective solution to help businesses fight counterfeiting – a criminal web that will prove hard to stamp out.

How standards strike back

ISO standards being developed by ISO/TC 247 on fraud countermeasures and controls educate organizations on best practices, systems to support their anti-counterfeiting technologies and management systems to protect them from the attacks of various threats.