The Russian Federal Agency on Technical Regulating and Metrology (GOST R) will host the 36th ISO General Assembly in St. Petersburg, Russia, from 16 to 21 September 2013. 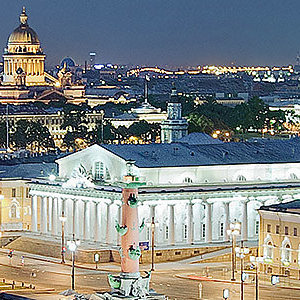 This news belongs to our archive.

GOST R President Grigory Elkin explains why the Agency is organizing this year’s Assembly and how Russia’s commitment to International Standards as a global solution is stronger than ever.

ISO Focus+: Before we turn our attention to the 36th ISO General Assembly, could you briefly describe the mission of GOST R and how it has evolved over the years? How do you see your leadership in such fields as aeronautics and space, the oil and gas industry, the safety of amusement rides and amusement devices?

G.I. Elkin: Rosstandart, the Russian Federation’s national standardization body, was created in the USSR in 1925. Standardization was already an effective instrument of economic development in the Soviet Union. Later, the scientific and technical revolution of the 1950s and 1960s further increased the role of standards, and international partnerships in the standardization field became a prerequisite for the development of trade with other countries.

In this day and age, it is important to get the business sector’s input in the development of national standards – which can be harmonized with the International Standards – to modernize Russia’s economy and help Russian industry reinvent itself and become more competitive. That is why cooperation with international organizations of standardization and metrology is the essence of Rosstandart’s activity today.

The USSR, which once encompassed the Russian Federation, was a founding member of ISO, with Russian being adopted as one of the three official languages along with English and French. Gosstandart, the original government body for standardization, and its successor Rosstandart are known within ISO as GOST R, where “R” stands for “Russian national standards”. From ISO’s inception, GOST R has always been an active contributor to the organization, supplying three ISO presidents in the persons of A.E. Vyatkin (1962-1964), V.V. Boytsov (1977-1979) and,  more recently, B.S. Aleshin (2011-2012). Over the years, Russian experts have been part of the ISO Council, the Technical Management Board, the Central Secretariat and technical committees. GOST R is a member of the ISO committees ISO/DEVCO, ISO/CASCO, ISO/COPOLCO and ISO/REMCO.

Russia intends to participate more actively in ISO technical committees.
In past years, the plenary meeting of ISO/TC 254, Safety of amusement rides and amusement devices, a Russian initiative, and the meetings of ISO/TC 20/SC 8, Aerospace terminology, and ISO/TC 67, Materials, equipment and offshore structures for petroleum, petrochemical and natural gas industries, have taken place on Russian soil.
Russia also held the kick-off meeting of ISO/TC 67/SC 8, Arctic operations. This year, there are plans to hold a meeting of subcommittee ISO/TC 20/SC 10, Aerospace fluid systems and components, as well as the plenary meeting of technical committee ISO/TC 20, Aircraft and space vehicles, in 2014. We are not only trying to be leaders in these technical committees, we are also making plans to branch out into other fields of relevance, such as systematic reliability in electrical engineering.

In a bid to support Russia’s industry, Rosstandart is working on Russian-language versions of existing ISO standards. There are at present over 1 800 standards in Russian on the ISO server and the Russian section of the ISO portal is now operational.

ISO Focus+: What inspired you to put forward Russia’s candidacy to host ISO’s next General Assembly in 2013? And why was St. Petersburg chosen over other major cities?

G.I. Elkin: The rapidly expanding role of international standardization in our country, especially since joining the World Trade Organization (WTO), is our primary motivation, spurred by globalized trade, the exchange of technologies and scientific ideas, and the strengthening of economic partnerships.

We see the ISO General Assembly 2013 as an important step for Russia, first and foremost as a means to promote international standardization in our country, but also to encourage the business community to get involved in the development of standards. Holding the General Assembly in Russia is confirmation of the country’s growing authority in the field of international standardization.

Choosing St. Petersburg as the venue for this event is no accident either, as this city is one of the country’s largest scientific and industrial centres. The industrial tissue of St. Petersburg’s economic sector is currently made up of over 700 large and medium-sized enterprises. The city  also has more than 400 scientific organizations and in excess of 130 000 highly qualified specialists.

But, besides its scientific and industrial potential, the city known as the “sea capital of Russia” boasts a rich history and culture that is deeply rooted in the history of the Russian State. It was from his St. Petersburg base, for instance, that Peter the Great opened a window onto Europe and the rest of the world. Today, St. Petersburg is the crucible of Russian culture and home to some beautiful historical monuments.

ISO Focus+: GOST R has decided to devote an open session to sustainability during General Assembly week. What would you like to see come out of this session ? Can you comment on how Russia is embracing sustainability within its own borders and how GOST R is contributing to this effort?

G.I. Elkin: In the Russian Federation, as in all countries, sustainable development is seen as the only way to ensure a flourishing human society, preserve the world’s natural treasures and look after the environment. It requires a lot of effort and expense, but the commitment to conserve material resources for future generations is of crucial importance.

Standardization contributes to this process. International Standards allow coordination on an international level in order to tackle global problems that cannot be solved by a country acting independently.

At the General Assembly open session, we hope to draw participants from different countries of the world, including business leaders, who will provide innovative suggestions, share their experiences of applying International Standards for sustainable development, and discuss plans for new work directions in the field of standardization.

We plan to address such key areas as trade facilitation, quality of life, innovation, protection of the environment, information technologies and education, focusing on what standardization and ISO’s business model should be like in order to provide stability on all levels, and particularly in the above sectors.

ISO Focus+: This is not the first time Russia hosts the ISO General Assembly. What has changed since the event was last held in Moscow (during the USSR) in 1967 and what would you like the delegates to take away from their visit?

G.I. Elkin: Hosting the ISO General Assembly in 1967 was a Party and Government decision. It was another country back then – the USSR. Today, the Russian economy is based on market relations. Russia has become a member of WTO and must adhere to the regulations of a world market whose main aim is to facilitate international barter. International Standards, which encapsulate state-of-the-art scientific and technological know-how, quality, reliability, safety and sustainability, have become an effective way of benchmarking the competitiveness of products and services.

I hope that delegates at the 2013 General Assembly will not only participate actively in the discussion of important strategic questions on international standardization, but that they will also take home beautiful memories of St. Petersburg, often referred to as the “Venice of the North”, of Russian hospitality, and of the warm friendly atmosphere and efficient organization of this event.

ISO Focus+: Where do you see GOST R in five years ? What new directions do you see the organization taking?

G.I. Elkin: Following Russia’s involvement in WTO, the role of Rosstandart has expanded to support the development of the country’s technical regulations, economic growth, product competitiveness, and consumer protection. The concept for developing a national standardization system for the Russian Federation by 2020 was approved by the Russian Federation Government in 2012. Today, the renovation of the national standards fund has reached 8 % a year, putting it on a par with developed countries, but we are planning to raise this figure to 10 % or 12 % and increase harmonization between Russian national standards and International Standards to up to 70 %. Work began in 2012 to prepare the Federal Law for standardization in the Russian Federation and will closely follow the recommendations made by ISO and other international  organizations. The new law will determine the role of state policy in the area of standardization, provide opportunity to use national standards in normative activity, as well as speed up and simplify the development of legislative and regulatory legal acts.